My name is Tom Rose. I’m a glass artist and I do mostly what’s called cold glass work, which would be cut, grind, polish and laminate. But I also do some fusing and some casting. I’ve been doing art glass work for about 25 years. What got me into doing glass was prior to that I had a career as a contract glazer, where I worked building skylights and sunrooms mostly. So I was involved in glass that entire time. The transition to doing art wasn’t that altogether difficult.

What is the meaning behind some of your work?

A tremendous amount of the work that I have has significant meaning from the standpoint of when something happened in my life. For instance, this piece is called Vertigo, and I happen to have had about a vertigo about five years ago. It was extremely bad and I wound up in the hospital with it. This piece basically reminds me of that, because it kind of winds you up, and that’s pretty much the way I felt with the vertigo.

This cast piece, on the other hand, is something that I decided to do to try and open other people up to kind of what is going on. This is called Behind the Veil. And in this purple piece of glass, there’s a thin veil across the front. That veil is pretty similar looking and is significant from the standpoint that it’s the same type of veil that a lot of countries utilize especially on women to completely cover everything up except the eyes. In this particular case, what I wanted was to be able to see through the veil and see the face, but then realize that the face behind has cracks in its facade as all of us do. It has a third eye, which sees everything, even though we may not know it. But also, the interior of this sculpture, which you can see a little bit from that side, is actually a different color. So one of the questions that might be asked—or some of the questions that would be asked would be—what are the cracks in your façade and what are you trying to hide from being behind the veil, and what color are you inside? Of course, the concept behind all of this is that we’re all the same color inside, and everybody has cracks in their veil, and everybody’s behind a veil, and basically we’re all the same. This is an attempt to try and get people to actually talk about those things and realize that we are all the same people, we just are.

When you're creating your work, do you have all always a specific intent behind it?

Sometimes yes, sometimes no. This piece, Behind the Veil, absolutely. I had a complete and total intent behind it. This is exactly where I was going with this piece. Some of the pieces that I build, I build literally because I like creating sometimes smooth and comfortable shapes—like this piece, The Wings. It is designed on a circle, goes in one direction, comes back in the other direction, very simple, very straightforward, but a very dynamic piece. And then some pieces I want to make not just dynamic but dynamic from maybe an irritating standpoint like this, which basically winds itself up.

One of the very first pieces that I made that I sold is called A Tear for Henry. That piece, if you stand back, you can see right in the center of it there’s a void that creates a teardrop. The name came from the fact that when I was making that piece, I got about halfway through making the piece and that’s when my mother called and said that my father had passed away, and his name is Henry. So therein lies the tear for Henry.

That’s an interesting question. I’m not even certain I can answer that question. I am effectively retired, I don’t need to work. Financially, my wife and I are set up fine and no issues. But literally, I wind up in the studio six days a week, 6, 7, 8, 9, 10 hours a day working, and I intend to do that until I drop. So I will be working until I cannot do it anymore. Of course, the artwork, part of doing the artwork as opposed to doing the construction, which I did 25 or 30 years ago, is I realized 30 years ago that my body was only going to be able to handle that kind of work for so long. And so this artwork is substantially easier to do for my body. I know I’ll be able to do it for an extended period of time. Since my intent is to live to be 120, I’ve got about 50 more years to go, so I’m going to be producing a lot of art. 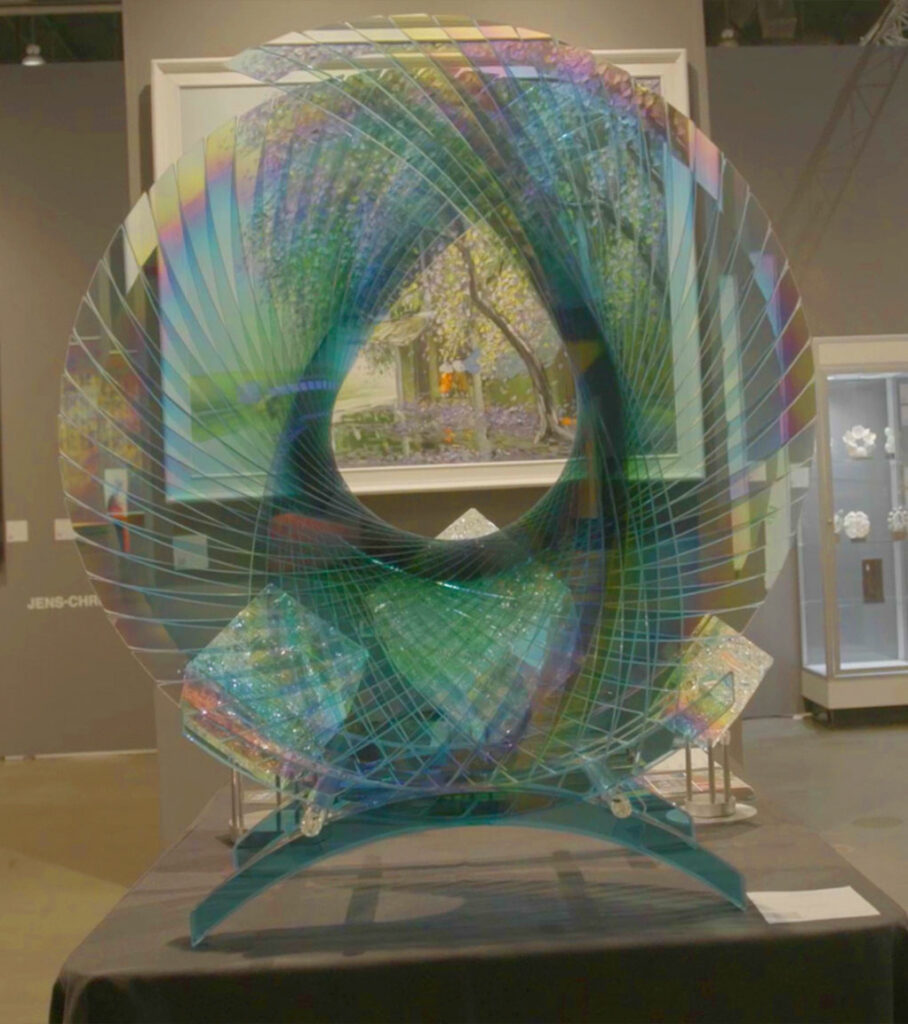 Art is just what I do. I love glass so much. It’s so interesting. It’s a very challenging material to work with. There are lots of things that can go wrong and lots of times when something goes wrong, you cannot correct the problem. But then again, sometimes something goes wrong and it turns out to be a good thing, which has happened a number of times—for instance, around the corner we have The Shattered Cubes. The Shattered Cubes are the perfect example of that. That was actually a mistake, to start with, and it took me a little while to figure out how to control that shatter. But once I figured out how to control it, now I literally have, so to speak, another product line.